Believe it or not, size doesn’t matter after all. How you treat these tender, rich egg noodle dumplings after boiling though definitely does.

I love späetzle. What’s not to love about a plump little egg pasta whose purpose in life is to be tossed in butter? I have to admit though it’s something I always order on the rare occasion I’m at a German restaurant and not something I’ve ever made at home.

Well Oktoberfest 2016 has inspired me for the Oktoberfest Dinner extravaganza and späetzle were figuring prominently in my plan. I didn’t want to buy a späetzle maker  so I looked up some recipes and found that there were a lot of different ways to achieve the homey looking tiny dumplings. Mostly they all involved pressing the dough through a tool with holes; a colander, box grater, or ricer. One also suggested punching holes through an aluminum pan but I didn’t want to bother with that. The right size späetzle would be key I knew, because that affects the way taste is perceived.

Texture is a huge thing in food. Do you know someone who likes salsa, marinara and every other tomato thing, but not tomatoes? That’s a texture issue. I knew that the different textures from the different tools could make or break my späetzle.

My biggest problem was getting the wet dough to break off after passing it through the holes. My cousin pointed out that they should be made by hand and then I wouldn’t have that problem. When he was growing up he lived for awhile in Germany with his father so he knows German food. But I am lazy, so there.

I figured since I was trying three methods, I’d test out three recipes too so I used recipes from Food Network Magazine, Cook’s Country, and Cook’s Illustrated. Some had seasoning in the dough, some didn’t. All were cooked by boiling but then they were treated differently:

After eating more späetzle than a responsible cardiologist would condone, I determined that the different sizes didn’t matter that much. I preferred the ones made with the box grater because they were the largest and most consistently sized, but the very small ones through the ricer were fine too. Even though the three doughs I made were different, there wasn’t an appreciable difference in taste between them. At the end of all this do you know what did matter?

Sautéing. The tasty browned crispy parts absolutely made these irresistible. So while simply tossing them in butter is fine, just like buttered egg noodles are good with beef stroganoff, sautéing these little babies takes it to a whole other level.

These tender, rich egg noodle dumplings sautéed golden brown and tossed in butter might change your side dish routine for life.

Enjoy this recipe for Späetzle Sautéed with Shallots with Triple Pork Shoulder Roast and coming up is the final recipe in my Oktoberfest series; sweet and sour braised red cabbage sprinkled with goat cheese. Of course, this dinner is best served with an Oktoberfest beer to stand up to all the hearty flavors and fall weather. Prost! 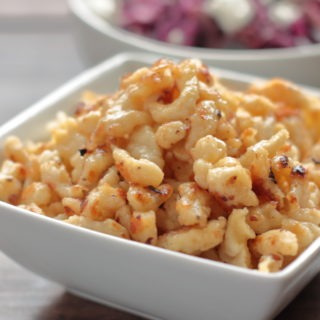 There are affiliate links in this post to some of the products I use or refer to. Amazon gives me a small spiffy for this, but you should always make your own decision about whether and where to buy.