Stuffed with sausage and wrapped in bacon, this Triple Pork Shoulder Roast will be the most flavorful pork roast you ever have.

Held in Germany, Oktoberfest is the original and largest volksfest in the world. What’s not to love about a beer festival and fair?

Don’t let the Oktober throw you, Oktoberfest is in September. Hey, when 5.9 million people drink 7.7 MILLION litres (16,273,ooo pints) of beer, and we’re not talking Bud Light, dates get a little fuzzy and people get kleptomaniacal. 110,000 tried to steal Oktoberfest mugs.

There’s a marketing slogan – Keep Oktoberfest Safe: lose your passport not your kid!

Many US cities throw their own Oktoberfest and along with the beer and fair activities, there is also great food like schweinebraten (pork roast), späetzle (egg noodles), and rotkohl (red cabbage).

Having little kids, my days of getting stockbetrunken at an Oktoberfest are on hold, but that doesn’t mean I can’t enjoy some fabulous German style food at home. And if I lose my iPhone in the house, it’s not really lost right?

The first of a series of three recipes, this Triple Pork Roast may be the most flavorful pork roast you ever have. I wanted to make sure that the pork roast had a lot of flavor because I wasn’t serving it with a sauce or gravy, so I stuffed it with German sausage. Still concerned, I wrapped it in bacon just to make sure. By then I was pretty confident that there would be plenty of meaty flavor. At this point even Homer Simpson was confident that there would be plenty of porky flavor.

Some common questions about pork roast:

Are pork roast and pork shoulder the same?

I do use pork shoulder, also called pork butt or Boston butt in this recipe but pork roast is a generic all-encompassing term and can also refer to pork loin which is much leaner and should be handled differently so always check a pork roast recipe for clarification.

How to cook a pork roast?

Long slow heat is the name of the game to get that super texture.

How to reheat pork roast?

Leftover pork shoulder roast tastes just as good. It’s very forgiving. you can heat a plate of pork roast in the microwave, or put it in a covered dish and heat in the oven.

How to cut a pork roast?

How to butterfly a pork roast?

Generally in a log-ish shape, you can hold your knife lengthwise to the roast and parallel and about an inch above your cutting board, and start slicing into the pork roast while rolling it away and you will spiral cut it open. It’s much easier than it sounds!

Pork loin is much leaner and so needs a much shorter cooking time, and will have less flavor.

How long to cook pork roast?

You need to cook a three pound pork shoulder roast about five to six hours when prepared in a slow cooker. If it’s not stuffed, it will take less time. The oven will be about three hours and a pressure cooker an hour to an hour and a half.

Natural pork shoulder shouldn’t have any solution added to it, it’s just pork. Anything marked ‘extra tender’ or something similar has been treated with a salt and chemical solution so that it will retain water. If you’re using a natural pork shoulder and have the time, you can brine it for a few hours to ensure it will be moist and tender.

Enjoy this recipe for Triple Pork Roast. Coming up are recipes for Späetzle Sautéed with Shallots and tossed in butter and sweet and sour braised red cabbage spinkled with goat cheese. Of course, this dinner is best served with an Oktoberfest beer to stand up to all the hearty flavors and fall weather. Prost! (cheers!)

Need something faster? Whip up this Oven Grilled Pork Tenderloin. 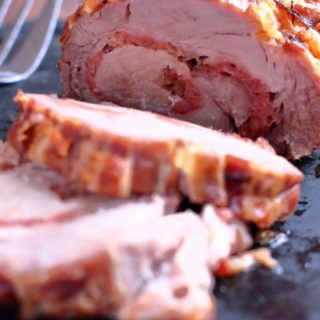