Panzanella is one of those simple non-recipe salads that in spite of its minimal ingredient list, turns out to be so much more than the sum of its parts. Each ingredient is so important that I can’t pick the top player. Of course perfectly ripe tomatoes are the lynch pin, but they wouldn’t be the same without the fruity olive oil, the sweetness and umami of the balsamic and the herby greeness of fresh basil.

All that being said, my favorite part is the crunchy, garlicky croutons. I would happily eat a bowl of these croutons instead of popcorn while watching a movie. Ciabatta is a great bread to use because it’s open holes make a great crouton when toasted. Breads with a dense crumb will make hard croutons.

Eat panzanella quickly while the croutons are still crisp or let the salad rest and the croutons will soak up the juicy goodness while still retaining good texture.

Tomato season depends on not only where you live but also what the weather has been like this season. Generally they last June to September and the biggest tomato producing states are California and Florida where it’s nice and hot with good humidity. Enjoy this salad while you can, as summer is coming to a close and kids are going back to school. Although it’s still hot here, I can definitely tell the days are shortening by the way the light is changing in the afternoons. Soon enough we’ll be all apples and pumpkins so enjoy the last of summer produce while you can.

Here are two other recipes with tomatoes and summer produce to enjoy: Summer Vegetable Hash and Crispy Chicken with Balsamic Tomatoes. 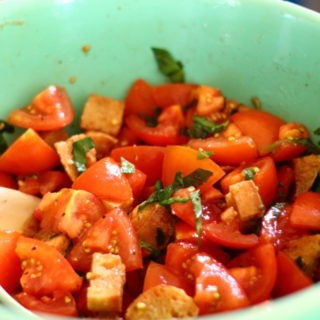 Chef Shelley
This will make more croutons than you need for one recipe worth of tomatoes. While the croutons can be made a day ahead, the tomatoes should be cut and dressed around serving time because refrigerating tomatoes changes the texture and makes them mushy.
Print Recipe Pin Recipe
Prep Time 10 mins
Cook Time 30 mins
Total Time 40 mins
Servings 4