Creamy Chicken Stroganoff; a little lighter than it’s beefy predecessor, but just as rich and tangy.

Where does the word stroganoff come from anyway? Am I the only one that wonders about these things?

And when you’re making this for dinner, does anyone else’s husband laugh and then start singing Billy Squire like he’s in junior high?

Anyway, in case the etymology of stroganoff is keeping you up at night (well I know it’s not keeping you up, but you’re awake so you’re contemplating random things in the middle of the night) here’s your answer:

Stroganoff is a Russian dish of sauteed beef with sour cream, supposedly named after the Strogonov family. They were insanely rich merchant land owners. And I mean funded the Russian invasion of Siberia, rich.

Can you even imagine? So the president comes to you and says, “I really, really, really want to invade Mexico!”. So you say, “Did you finish your peas? Okay, here’s a few trillion dollars. Have fun. Do NOT ruin those new planes I just bought you!”.

This Creamy Chicken Stroganoff is a little lighter without the beef, but the sauce is still hugely flavorful with the addition of some Worcestershire and plenty rich with all the sour cream. I substitute 2% plain Greek yogurt though, and it’s just as good. Either way, do not over heat the sauce once you add the dairy or it will curdle into chunky bits.

Hmmmm, Worcestershire…..that’ll be good for a 3:17am wondering.

Another tasty recipe with mushrooms: 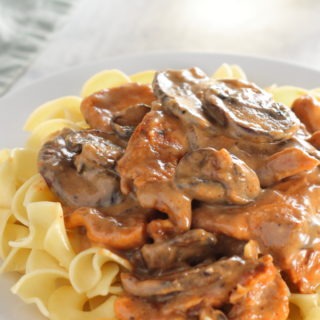