Cinnamon Roll Pancakes; big fluffy pancakes with all the cinnamon brown sugary goodness of cinnamon rolls. Even the icing! Fast enough to make for breakfast anytime or for dinner, I don’t judge.

I dreamt these up literally one night. I have no idea what was going on that I was dreaming about pancakes, but the kindergartner was certainly a willing test subject to run through five or ten batches for quality control. Generally speaking we have not been a ‘get all crazy with the pancakes’ group. Plain or plain with maple syrup and butter is about it. I think I made one in the shape of an H once and Hank was too horrified to eat it. So needless to say I haven’t bothered to get jiggy with them.

I have been using a lot of cinnamon recently though, and the thought of mixing cinnamon, brown sugar and butter and slathering it on a stack of pancakes sounded mighty good. And then of course you have to have the icing drizzle, otherwise they wouldn’t be cinnamon rolls!

To make these super speedy, I use my DIY Make Ahead Baking Mix, which I’ll be posting soon. I’ve written it up as an individual batch in this recipe, but feel free to use whatever you like to use for pancakes until I get back to you with the magic mix I will be requiring you to use. Okay, requiring is a little rough. How about encouraging strongly? Trust me, with the million things you can make with that baking mix, you will want to.

In the meantime, enjoy these Cinnamon Roll Pancakes and feel free to double up on the icing if you’re so inclined; grownups’ prerogative. 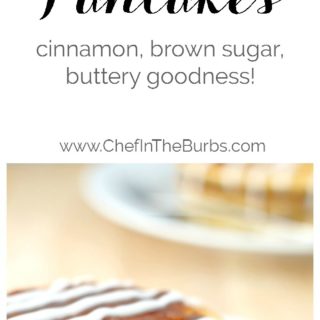 Chef Shelley
If you like your pancakes thicker or thinner, adjust the amount of milk to your liking. You can probably substitute soy/almond/coconut milk although I haven't tried it.
Print Recipe Pin Recipe
Prep Time 5 mins
Cook Time 10 mins
Total Time 15 mins
Servings 9