I’ll admit it. I had trouble naming this recipe. Dishes whose titles list every single ingredient are annoying. When it comes to only five ingredient recipes though, each one plays a big part and deserves equal billing. In trying to land the sweet spot somewhere between Orange Chicken and Pan Grilled Chicken Breasts with Orange Marmalade Dijon Glaze with Aleppo Pepper, I settled on Chicken with Spicy Orange Marmalade Glaze. It’s still long enough to be descriptive, but not so long you need a glass of wine just to get through the title.

A little ditty about ‘spicy’.

Chiles or chilis, are rated for hotness in Scoville Heat Units (SHUs). The Scoville scale is named after its inventor, Wilber Scoville. Scoville was a pharmacist and created a simple way to measure the pungency of a hot pepper. Named the Scoville Organoleptic Test, it is based how many equal parts sugar-water does it takes to completely dilute the heat of a ground chili.

That guy obviously had way too much time on his hands. Even though we use much more ‘sciencey’ techniques now, results are still converted to Scovilles. What a legacy.

Don’t let the spicy scare you. I’m offering up a sliding scale of spiciness so you can tweak the recipe to your liking.

This is the stuff that’s in the jars at pizza places. It’s a totally generic name so when you’re buying it you don’t know what you’re getting. The most common chiles used are chile de arbol or japones chiles with a SHU of 15,000 – 30,000 or tien tsin chilis which are 50,000 to 75,000 on the scale. That’s a huge difference! If you’ve ever had some that were hotter than usual this is why.

If you’re a divided family, you can always sprinkle the chile on after, that way everyone is happy.

Rice, rice pilaf, or any grain. Green veg or salad.

I’m not going to lie, this is a tough one because of the sweet glaze. I would either go with a full flavored white like Chardonnay or something sweet if that’s the way you like it.

Looking for other potentially spicy dishes? Check out: 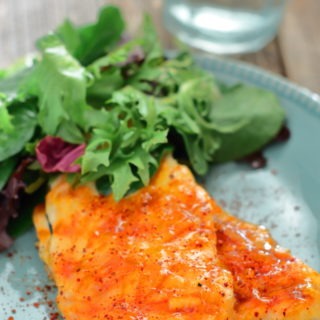 If you don’t have a grill pan, no worries, just use a regular sauté pan. If some don’t want it spicy, omit chile pepper when mixing glaze and sprinkle it on after for those who want it.