Chicken and Shrimp Pho is the perfect recipe to show off your Liquid Gold Chicken Stock Broth. Pho, a Vietnamese noodle soup with about 100 different versions, is just as much, if not more about the broth as it is the stuff in the soup and the stuff you put on the soup. If you love a lot of stuff, this is the soup for you, especially as it can be prepared in less than 15 minutes!

If you’ve thought that pho was pronounced foe you’re not alone. This is a good visual reminder.

If you’re not familiar with the meme I’ve included, just look at some of the puntastic restaurant names that clearly illustrate the correct pronunciation.

Regardless of how you pronounce it this is one of those dishes where the end result is so much more than just the sum of its parts. It’s a perfect winter warmer upper.

You start with chicken broth, chicken, shrimp and rice noodles and the rest is up to you. Traditionally sprinklings include:

Some people love to pile it all in and stir it up while others are more discriminating in their choices and placement. Don’t let anyone tell you how to get your phở  on, you do it how you like it best! All of the additions or none, it’s up to you. 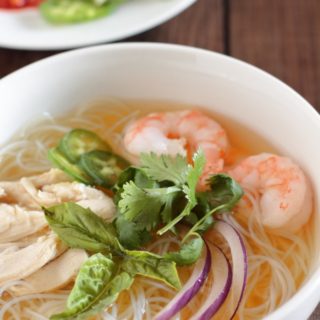 Chef Shelley
I prefer my broth more delicately flavored, so the spices here are about half of what is generally seen in recipes. Taste and decide if you want to add more.
5 from 1 vote
Print Recipe Pin Recipe
Prep Time 5 mins
Cook Time 15 mins
Total Time 20 mins
Servings 4